Tiered vs. Interchange Plus Pricing

You're setting up your company’s credit card processing and are considering your rate plan options. If you’re concerned about costs, you’ve likely narrowed your research to Tiered and Interchange plus pricing.

We’ll take you through the ins and outs of each plan to make the choice a bit simpler.

Tiered pricing is the most common rate plan, so — if you’re not sure what plan you’re on — there’s a good chance you’re on this one. Another way to know is if you’ve ever seen “Non-Qual” on your merchant statements.

With Tiered pricing, transactions are lumped into three categories: Qualified, Mid-Qualified and Non-Qualified. Transactions with low risk or low reward usually earn a Qualified rate, the lowest rate charged. Examples of this include in-person transactions when a mag-stripe card is swiped or an EMV card is inserted using an EMV-ready terminal. With higher risk or greater reward (for instance, a keyed-in credit card transaction or business rewards card) the transaction downgrades to a higher-rate tier (to Mid-Qualified or Non-Qualified).

Here’s where things get a bit vague — Tiered pricing isn’t regulated. There isn’t a set threshold that triggers a different rate tier. Furthermore, some providers that offer Tiered pricing are incentivized to let downgrades occur to boost their profits.

As mentioned before, risk and reward dictate which tier a transaction falls into. Here’s a list of reasons why a transaction may be downgraded:

Some of these, like settling batches promptly, are in your control. Others are not. For instance, look at your terminal software. The card brands (Visa, MasterCard, Amex and Discover) update their best practices and Interchange guides twice every year in April and October. When an update is made, some providers fail to update their systems accordingly. This makes it impossible for you to secure the lowest processing rates, which is exactly what some providers want. 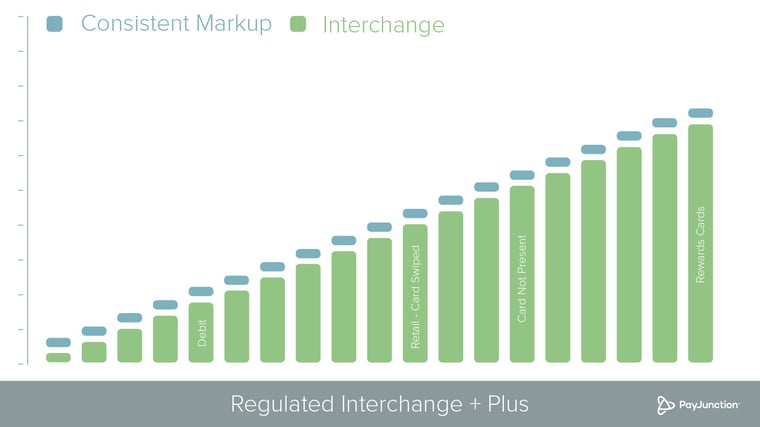 In contrast, Interchange plus pricing is the most transparent rate plan. It’s based simply on the Interchange — or wholesale cost — for the transaction, plus your provider’s markup. Interchange is set by the card brands and charged to your provider, but passed on to you. Businesses on this rate plan obtain clear, itemized merchant statements that list the Interchange rate and markup separately.

One tactic we’ve seen is Non-Qualified Interchange. This doesn’t exist because Interchange pricing isn’t broken up into tiers, however, we’ve spotted this fee on some competitors’ merchant statements.

A more common method is withheld Interchange refunds. As previously stated, businesses on Interchange plus pricing get their Interchange refunded whenever they issue a return. Some providers purposely withhold these funds because they don’t think their customers will notice.

It’s important to know what you’re entitled to with Interchange plus pricing to confidently reap its benefits. Working with an ethical Merchant Account Provider helps too.

As illustrated in the above diagram, businesses benefit from the transparency of Interchange plus pricing over Tiered (shown on the right), which is arbitrarily determined.

Businesses must undergo proper merchant underwriting to qualify for Tiered or Interchange plus pricing. Although a benefit for most businesses, this might be problematic for those seeking a quick fix.

As a business grows in scale and transaction volume, benefits like transparent pricing and Interchange refunds can greatly impact their bottom lines. Businesses that are currently on Tiered pricing should request a statement analysis or do their best to look through their merchant statements for excessive ERIFs. If it feels like too many of your transactions are being downgraded despite your adherence to best practices, it might be worth switching to a provider that offers Interchange plus pricing.

What rate plan is your business currently on? Is there one you’re leaning toward? Let us know how your research is going in the comments section below.

Are You Being Refunded Interchange?